TWIST (Training With Input Selection and Testing) is a new evolutionary algorithm [1] able to generate two subsets of data with a very similar probability density of distribution and with the minimal number of effective variables for pattern recognition.

Consequently, in the TWIST algorithm every individual of the genetic population will be defined by two vectors of different lengths:

2) the second one, showing which inputs (M) have to be used into the two subsets and which one have to be deleted.

The Figure  depicts the dynamic of the TWIST algorithm. 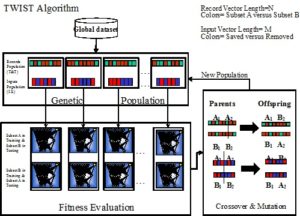 We have shown in many papers [2-15] that the TWIST algorithm outperforms the other splitting strategy (i.e. random distribution and K-Fold Cross Validation) in terms of results when they are applied to real medical data and also to classic datasets available from the UCI Machine Learning Repository [16].

The “reverse strategy” used in this algorithm tends to generate two subsets with the same probability density function, and this is exactly the gold standard of every random distribution criterion [3]. In addition, when the “reverse strategy” is applied, two fitness indicators are generated: the accuracy on the subset B after the training on the subset A, and the accuracy on the subset A after the training on the subset B. But only the lower accuracy of the two is saved as the best fitness of each individual of the genetic population rather than an average of the two or the higher of the two. This criterion increases the statistical probability that the two sub-samples are equally balanced during the genetic evolution because of the quasi logarithmic increase of the optimization process. We have also demonstrated experimentally [2] that when there is no information in a dataset, the behaviors of the TWIST algorithm, the Training and Testing Random Splitting and the K-Fold Cross Validation are absolutely equivalent. Therefore, TWIST does not code noise to reach optimistic results [2].

Our results have shown that TWIST algorithm is superior to current methods: pairs of subsets with similar probability density functions are generated, without coding noise, according to an optimal strategy that extracts the minimal number of features and the most useful information for pattern classification.

[3]       M. Buscema., E. Grossi, M. Intraligi, N. Garbagna, A. Andriulli and M. Breda, “An optimized experimental protocol based on neuro-evolutionary algorithms. Application to the classification of dyspeptic patients and to the prediction of the effectiveness of their treatment”, Artificial Intelligence in Medicine, Vol. 34, Issue 3, July 2005, pp. 279-305.