The Meta-SOM -Multi-SOM system is a supervised ANN model able to create future maps of the input. Therefore, it not only is able to correctly classify the input basing on an external target but can also provide information concerning the articulation of classes and their relationships with each other. The Meta-SOM -Multi-SOM system is composed of two different nets: the first one (Multi-SOM) is supervised, while the second one (Meta-SOM), which is not supervised, processes the weights of the first one and reproduces a classificatory output. The Multi-SOMs are influenced by the SOM networks, but they upset their structure, transforming them into supervised networks; the Meta-SOM networks maintain the structure and purposes of the SOMs, but their input is constituted by the models of the input classes created by the Multi-SOMs. 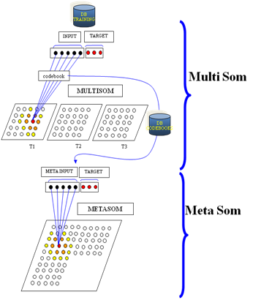 An example of Meta-Multi SOM applied to optical recognition of handwritten digits is shown. In Figure,  10 SOM matrices (5 rows x 5 columns – each one for each digit type) of Multi SOM are shown after the training phase.

The next Figure shows a 16 Rows x 16 Columns Meta-SOM  after learning of the codebooks provided by the Multi-SOM. 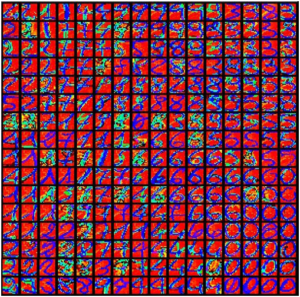