Halland is the smallest Region of Sweden on the south west of the country, extended between the regions Västra Götaland (Göteborg) and Skåne (Malmö). With six main municipalities, and approximately 300,000 residents, the areas of the region where we can find the higher concentration of cultural activities are the coast, and the strip along the E6 motorway. The region is renowned for its beaches and recreational areas, and tourism is consequently a major sector of the local economy. Shopping tourism is also very developed. This first project in Sweden, headed in the land of Halland, was innovative for many reasons. First, it was designed thanks a collaborative approach for the interpretation of the concept of culture led development in the cultural and creative field, with respect to the regional social, economic and cultural characteristics. Second, it was also innovative in term of complex system of variability and dimension of the data set. Third, the use of the TWC (Topological Weighted Centroid ), reached an extraordinary consensus of the regional stakeholders and for other region neighbourhoods it was the way to read their regional context in a contemporary post industrial/knowledge based society. 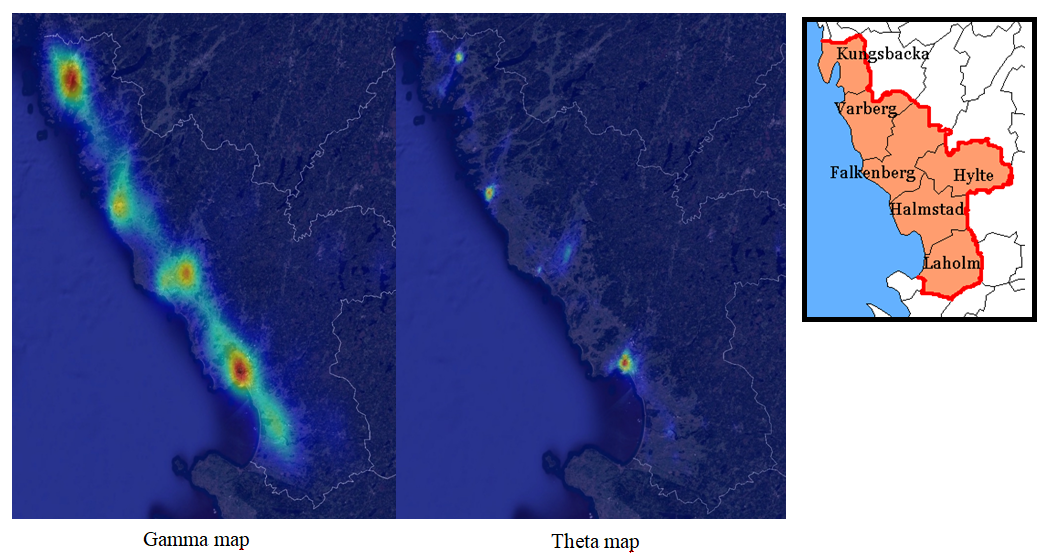 Skaraborg is the second project in Sweden. A Province extended on the east side of Goteborg (Västra Götaland), in a splendid region characterized by the assets of tangible traditional economic activities and natural heritage, and the desire of the local governance and representatives of the enterprises sector to find new opportunities of growth with the post industrial paradigms based on culture, creativity and related industries. Also in this project the collaborative approach for the development of the methodology and the collection of data was the precondition for the understanding of the results of the elaboration, as a starting point for designing future policy based on a complex system of link between cultural variables and other aspects of the local socio-economy. In this project was also highlight the absence of boundaries between the different categories of culture related and not related activities and facilities. Culture is spread beyond the bursaries of the various level of territorial governance.

The third project is in the north side of Goteborg, along an area that progressively, moving to the north is permeated by adjacent layers of 1. Post – knowledge based activities, 2. To resilient industries and industrial sites, 3. Until the natural based economy in the northern side of the region studied. This progressive change of attitude toward progress and development, from the south side of north Goteborg to the north site is affected by the central and centripetal role of Goteborg toward the creative post industrial economy that leave to the fairest area of the region a more traditional economy and the stress of not being able to move away from it. The study has growth the comprehension of this condition, but is has also help the local governance to move from it, maybe with a more collaborative approach of the different area and cultural/economic assets of the region studied.