The fundamental characteristic of the Meta-Net consists of considering not only the “positive credibility” of its composing classifiers (i.e., “this pattern is white”), but also their “negative credibility” (i.e., “this pattern is not white”). So, the characterizing connection of t coniche Meta-Net is to connect each output node of each composing classifier with each output class. “Complete grid” connections are planned between Meta-Net inputs and outputs, and each connection can be either excitatory (positive numbers), or inhibitory (negative numbers).Between 1994 and 2008 Semeion researchers conceived and developed a series of Meta-Classifiers based on some common traits and called them “Meta-Nets.” All Meta-Nets have typically similar neural network architecture; certain input nodes are the whole outputs of all composing classifiers, and certain output nodes are the output classes of the classification problem. The connections between Meta-Net inputs and outputs always possess a complete grid structure and are defined by specific algorithms characterizing the Meta-Net peculiarities. 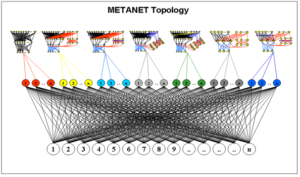