ACS is an auto-associative neural network. ACS is an ANN endowed with an uncommon architecture: any couple of nodes is not linked by a single value, but by a vector of weights, where each vector component comes from a specific metric. Such “bio-diversity” of combinations of metrics can provide interesting results when each metric describes different and consistent details of the same dataset. In this situation, the ACS is an appropriate algorithm that forces all the variables to compete among themselves, in different respects. The ACS algorithm, therefore, is based on the weights matrices of other algorithms. ACS will use these matrices as a complex set of multiple constraints to update its units in response to any input perturbation. ACS, consequently, works as a dynamic non linear associative memory. Whenever any input is set on, ACS will activate all its units in a dynamic, competitive and cooperative process at the same time. This process will end up when the evolutionary negotiation among all the units will find its natural attractor. The ACS ANN is a complex kind of C.A.M. system (Content Addressable Memory).

We present an example of ACS work using the known Gang dataset (see figures 1a, 1b, 1c). 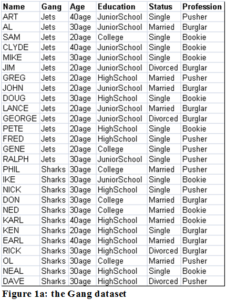 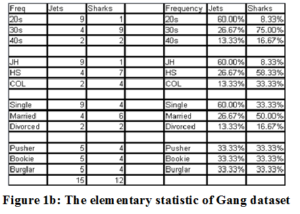 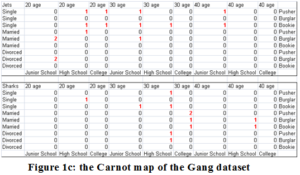 Figures 2a and 2b show the answers of ACS when the prototype of a Jets is requested. 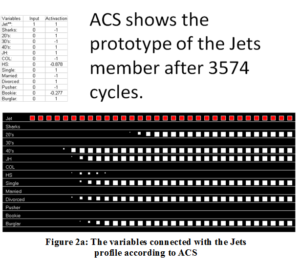 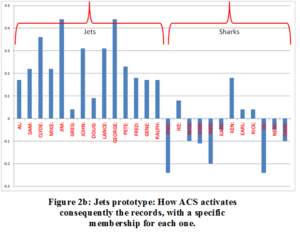 Figures 3a and 3b show the answers of ACS when the prototype of a Sharks is requested. 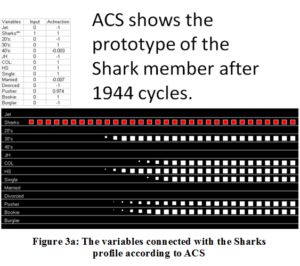 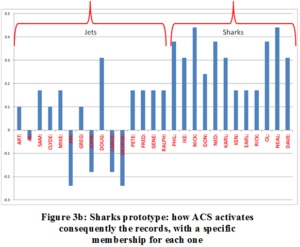